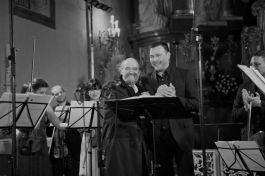 Andreas Scholl has released a series of extraordinary solo recordings including: Wanderer – a disc of German Lied in partnership with pianist Tamar Halperin; O Solitude – an all-Purcell album with Accademia Bizantina which won the 2012 BBC Music Magazine award, Arias for Senesino, Heroes – a disc of arias by Handel, Mozart, Hasse and Gluck, Robert Dowland‘s A Musicall Banquet, Arcadia – a collection of rare and unpublished cantatas by composers from Rome’s Arcadian Circle, Wayfaring Stranger – a selection of specially arranged English and American folksongs with Orpheus Chamber Orchestra, Bach cantatas with Kammerorchester Basel and Vivaldi Motets with the Australian Brandenburg Orchestra, all of which are released on Decca. As a prolific recording artist his discography also includes recordings for Deutsche Grammophon – Handel’s Solomon and Saul with Paul McCreesh and for Harmonia Mundi including Vivaldi’s Stabat Mater; Caldara‘s Maddalena ai piedi di Cristo; and Crystal Tears - lute and consort songs by John Dowland. His DVD releases include productions of Giulio Cesare (for both Decca and Harmonia Mundi), Rodelinda (Warner) and Partenope (Decca).

Highlights this season include two important new projects: a collaboration with baroque flautist Dorothee Oberlinger for a recording and concert tour with a programme of cantatas by Bach entitled Small Gifts from Heaven; and with regular collaborators Accademia Bizantina he presents a newly curated programme, Invocazioni Mariane, in celebration of the cult of the Virgin Mary with music by composers from 17th century Italy.

Scholl sang his signature operatic role Giulio Cesare in his recent debut at Oper Frankfurt as well as at Théâtre des Champs-Elysées and at the 2012 Salzburger Festspiele (opposite Cecilia Bartoli). He has also appeared as Bertarido (Rodelinda) in which he made his debut at both the Glyndebourne Festival Opera and The Metropolitan Opera (opposite Renée Fleming). Concert performances have included appearances with Berliner Philharmoniker, New York Philharmonic, Royal Concertgebouw Orchestra, Boston Symphony Orchestra, and with all the world’s leading baroque orchestras; and at the 2005 Last Night of the Proms – the first counter-tenor ever to have been invited.

Born in Germany, Andreas Scholl‘s early musical training was with the Kiedricher Chorbuben. He later studied under Richard Levitt and René Jacobs at the Schola Cantorum Basiliensis. A Grammy nominated artist, he has won numerous awards and prizes including the prestigious ECHO Award for his composition The Emperor‘s New Clothes and The Nightingale released on Deutsche Grammphon.